Did you see The Refashionista on Rachael Ray today? Didja?

I watched it with the kiddo tonight. I saw on the blog that she would be on and recorded it, but I surprised the kid. When she figured out who was on, she said, “I love it when someone we already like gets on TV. It’s like we are part of a revolution or something!”

So, here is my promised second outfit refashioning. We did this last weekend, but I have no time to blog in-between all of my refashioning and home repair.

The starter dress was one of my all-time favorites of the kid’s. When I saw it, I wanted it for myself. Unfortunately, they do not sell my size in the junior’s department.

We bought it on the clearance rack at Target for about $6. When I bought it last fall, I assumed she would wear it through this summer, based on her size at the time. I thought it could be paired with leggings and a sweater to be worn through the winter. Then, shuck all that for a cutie spring dress. Then, eventually, she would outgrow it. I was surprised – and annoyed – that she wore it once and it wouldn’t fit again.

I need to wrap her in duct tape so she will stop growing.

I’ve held onto it for a year because I was going to do SOMETHING with it. I thought it would make a cute pillow, but it doesn’t really fit any decorating scheme I have going on (hahahahah. That would be post-post-post-college decor.) I had decided I would make some sort of purse out of it, but hadn’t totally landed on a plan for that. Then, I took another look and realized I could get a skirt (for her) and a purse (for me) out of the same dress! Well, I think. Part 1 is done, at least.

First, I had to rip out the zipper. It was a quality zipper, so I hung onto it. I think it’s going to work in my purse!

Then, I separated the lining from the dress, just by pulling it through the neck.

And I whacked that sucker off at an appropriate length for an 11-year-old’s skirt. I turned it upsidedown, so the blue bottom became the waistband and hemmed the new hemline. The new waistband (old hem) already had a thick hem for me to thread elastic through. I opened a few stitches and slid some elastic through. Ta da!

As I was making the kid pose against the jungle that is currently our backyard, she had a brainstorm. And in a moment that will go down in iPhone photography history, I caught a “Colleen” brainstorm on camera!

I can not stop laughing when I see this photo. Seriously, dude, you have no idea how often I see that face. “OH! I KNOW!” … and then something insane happens.

Ok, so here is what her brainstorm resulted in:

The kid styled the dang outfit! It is at this point I feel I should mention that for the last three weeks, I have worn nothing but jean shorts (that are at least two sizes too large) and t-shirts. If I had my druthers, I would never wear anything else again. The kid’s style is allllll her.

So, I thought that was it. Then, Independence Day rolled around and we wanted to make an appearance at an annual ice cream social and fireworks display, sans fireworks display (due to a drought-induced burn ban), thrown by our friends. That afternoon, she came to me and asked if she could cut up this Merona t-shirt with a bleach stain on the shoulder:

After I made absolutely, positively sure that it was my shirt to cut up, I told her to go for it.

Apparently, she had been browsing The Refashionista’s blog when I wasn’t looking (true story) and had a great no-sew idea for what to do with a too-large t-shirt.

Check out that Fourth of July cuteness! She later painted her toenails red and her fingernails blue.

Here is another angle, where you can see how she tied the sides: 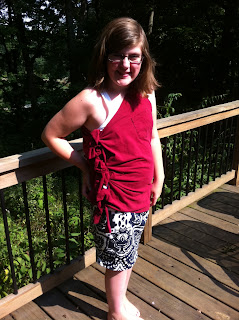 How awesome is that?

So, there you have it: an accidental mother-daughter refash.

Yes, I just said “mother-daughter refash.” You can barf now.

In other news, I’m still working on my table renovation project (although project delays have me focusing my free time attention on finishing the kid’s dollhouse she got for Christmas three years ago). The stupid cupping boards for the table are driving me crazy, but I will overcome with the help of concrete block, oh yes I will. Furthermore, any other work – such as having a temper tantrum and throwing cupped boards all over the yard, then storming off to Lowe’s for new lumber and painting – has been put on hold due to the insanely high temperatures we are having. It turns out, you don’t want paint in temperatures above 90 degrees with the paint I’m using. 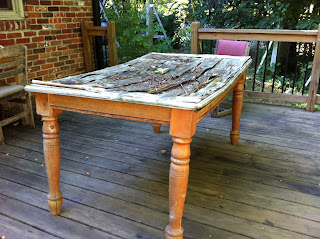 Never fear, people. I’m going to turn this little piece of redneck heaven into a beautiful and useful piece of furniture. And if I don’t, I will embrace my heritage and we’ll learn more about how baling wire is not just for bales of hay.